We chose Koh Lanta based on its spacious beaches, proximity to excellent snorkelling and diving sites, and reputation for being one of the few islands to maintain its traditional charm. We decided to stay at ‘Escape Cabins’ for the first few days; beautifully decorated, air conditioned little bungalows with a charming little pool and a short walk from the beach. Although still reasonable, it was more than we wanted to spend for most of our time in South East Asia, (around 1,000 baht or £20) but we had a perfect time there and were glad for the little luxuries whilst we adjusted to the sweltering heat. Yuko the owner spoke excellent English and was always around to help us or recommend places to go.

Pretty much the only way to get around the island is to hire a moped, which is what I was persuaded into after realising that we would otherwise be confined to our stretch of beach. Karl has ridden a lot before and I did actually feel safe, clinging to his waist with a carefully chosen helmet. Especially as we were visiting in low season, there were very few cars on the roads and those that were drove very considerately, and on the whole they are ridden more like electric bicycles than motorbikes. On the first day we took one around the whole island to explore.

The island is large in comparison to many of the southern islands, but you would still be able to get around it an hour on a moped. One end of the island is a National Park, with thick jungle and wild monkeys; the other end is more densely populated with small, friendly villages selling gasoline in empty alcohol bottles.

The first place we stopped was Old Town, a beautiful, wooden village in which most of the buildings have stood for hundreds of years. After spotting a sign outside one advertising ‘Night Yoga’, we started chatting to Pierre, from France, who has lived on the island for a year and now and works at a B&B called ‘The Old Times’. He showed us around, explaining as he rapped on the wood that it is strong that nothing can get inside it, and it will continue to stand without rotting for many more years still. The place is split between two sides of the road, one with more expensive air conditioned rooms overlooking the sea, and the other over the town with cheaper, fan rooms. Each room is named and themed after a book, and we fell in love with ‘The Little Prince’ room on the town side, and booked it straight away for our last few days on the Island. We also had lunch in Old Town in one of the many restaurants perched on decking overlooking a sea filled with tiny misty islands.

After lunch we stopped at a beach for our first sea swim of the year. The water was warm and the sand was soft and white, scattered with coconuts and hermit crabs. After our swim we bumped into an Italian couple, Hannes and Kat who we had briefly met on the ferry over to Lanta, and we chatted the them for a while about music festivals and bands, and learned that he plays the bagpipes! They told us about a ‘four islands snorkelling tour’ they were doing the next day and we decided to join them.

On all the leaflets we had seen, the snorkelling trips were advertised to be around 1500 baht per person, or around £30. Perhaps it was because ours was on a wooden slow boat rather than a speedboat, or because it was low season, our trip was only 700 baht (around £14) per person. It was booked through the place Hannes and Kat were staying, called BeeBees Bungalows. We were picked up at eight and taken across the island to the boat, where we were piled onto an old wooden boat with several other tourists.

The first ‘Island’ stop was a cove near Koh Muk. As the boat slowed, there were several gasps as people looked out into the crystal clear turquoise waters below and immediately saw dozens of colourful fish. We excitedly clambered into the water whilst everyone inspected the bucket of masks and snorkels in the centre of the boat. Because we knew there would be lots of snorkelling opportunities throughout our trip we had decided it was worth buying our own and this had definitely been a good move. When we had descended the steps into the water the guide excitedly shouted ‘Nemo, Nemo!’, and we saw the waving anemone just like in the film, with a few orange heads shyly peeking out. We duck-dived down for a closer look and managed to get a few good photos. The clownfish were just one of many wonderful fish from angel fish to butterflyfish, and this would turn out to be the most impressive snorkelling stop of the day. We stayed for about an hour; everyone transfixed by the stunning world beneath the surface. 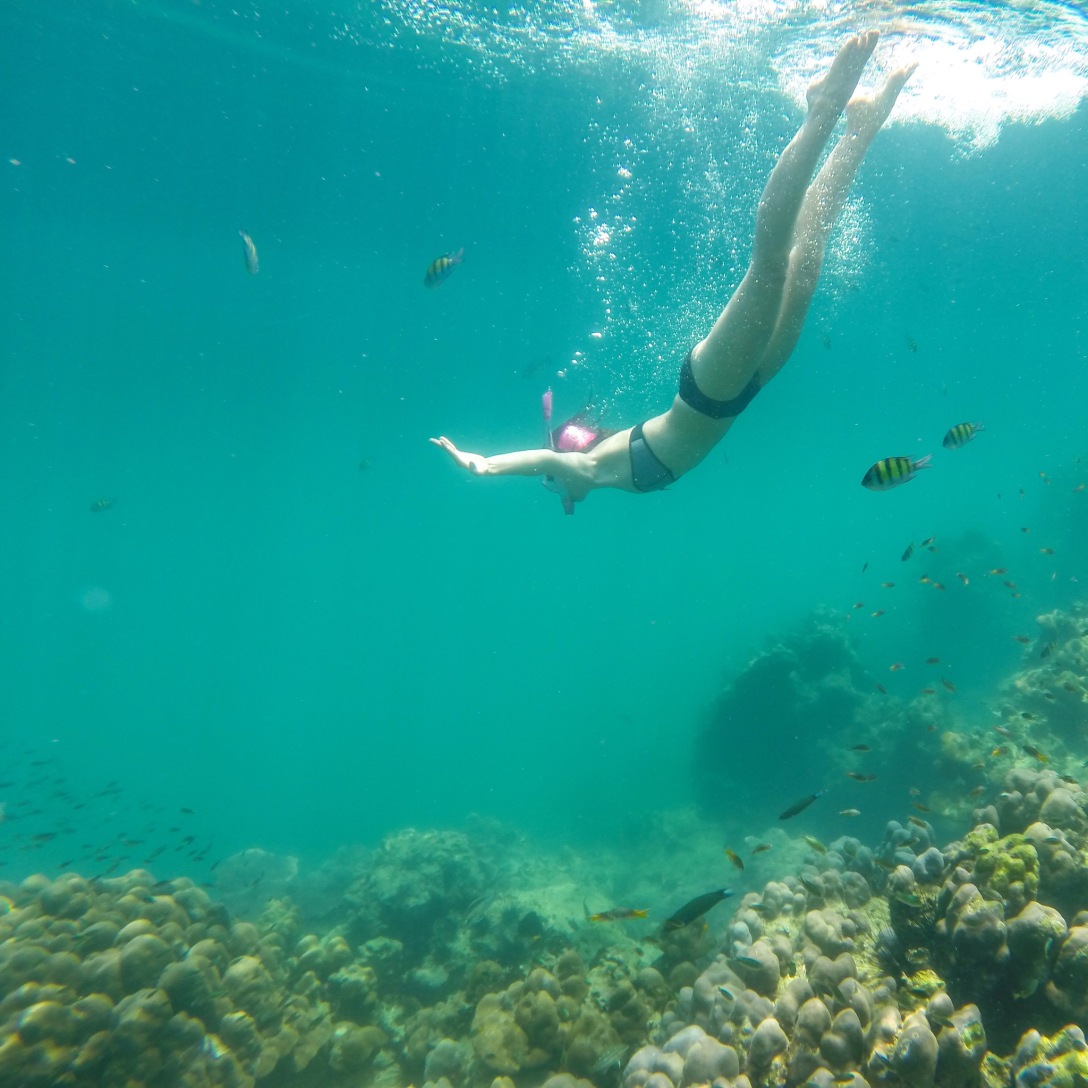 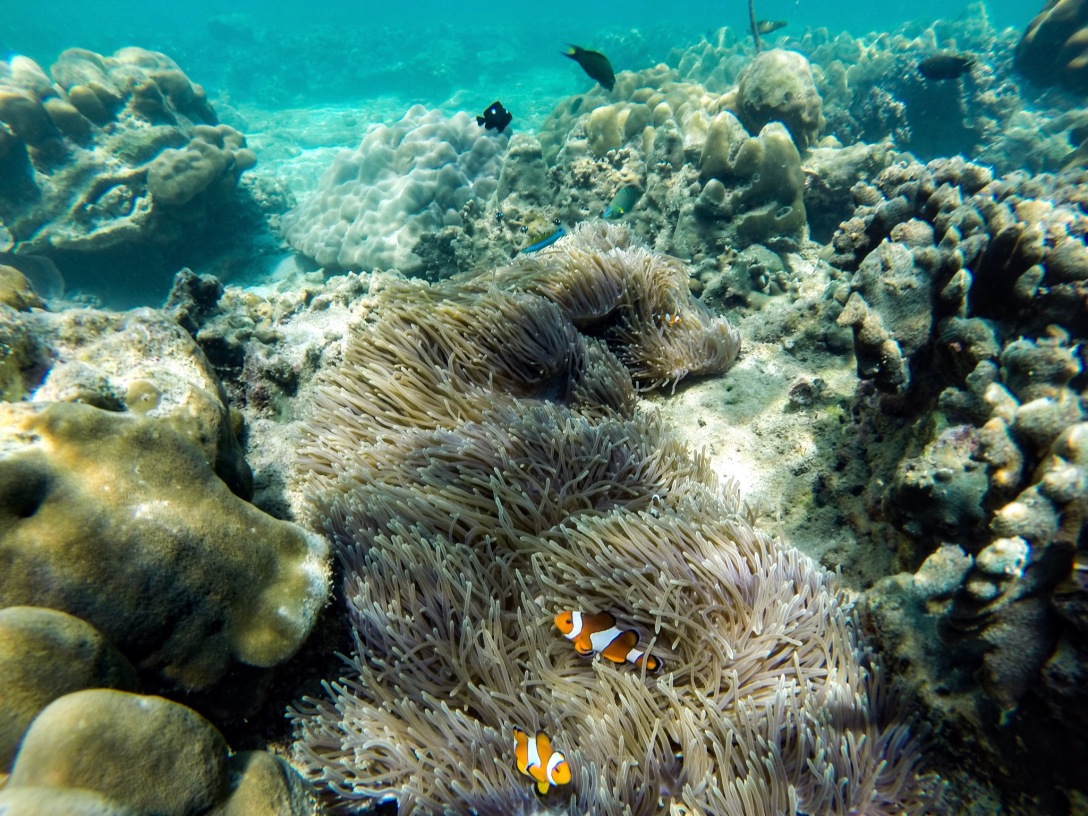 The next time the boat stopped, we weren’t quite as convinced. The darker water was dotted with ominous looking jellyfish, and there were mutterings amongst the group when they started to pull out life jackets and signalled for us to put them on. We were close to a cliff face, with white spray crashing against it, and no sign of coral or non-terrifying fish around. Unsure, one by one we gradually all made it into the water, frantically trying to avoid looming jellyfish, and noticed that we were being guided towards a small opening in the cliff face. Our guide had a small, slightly pathetic torch which he lead with, but essentially we were in an almost entirely pitch black cave tunnel, knowing there were jellyfish around, with a guide who barely spoke a word of english who was wearing his life jacket like a nappy. We pressed on through the cave-tunnel for what I later found out was almost 200m, but every centimetre of jellyfish infested darkness was worth what we were to discover at the end.

Gradually, the inky black water lightened to aquamarine, and then the cave too filled with light. Ahead of us was a huge, circular expanse of perfectly clear water which lapped onto a snow-white beach. Surrounding us entirely, except for the small entrance, was a towering cliff face adorned with foliage. The guides watched our astonished faces and proudly announced “Emerald Cave”. 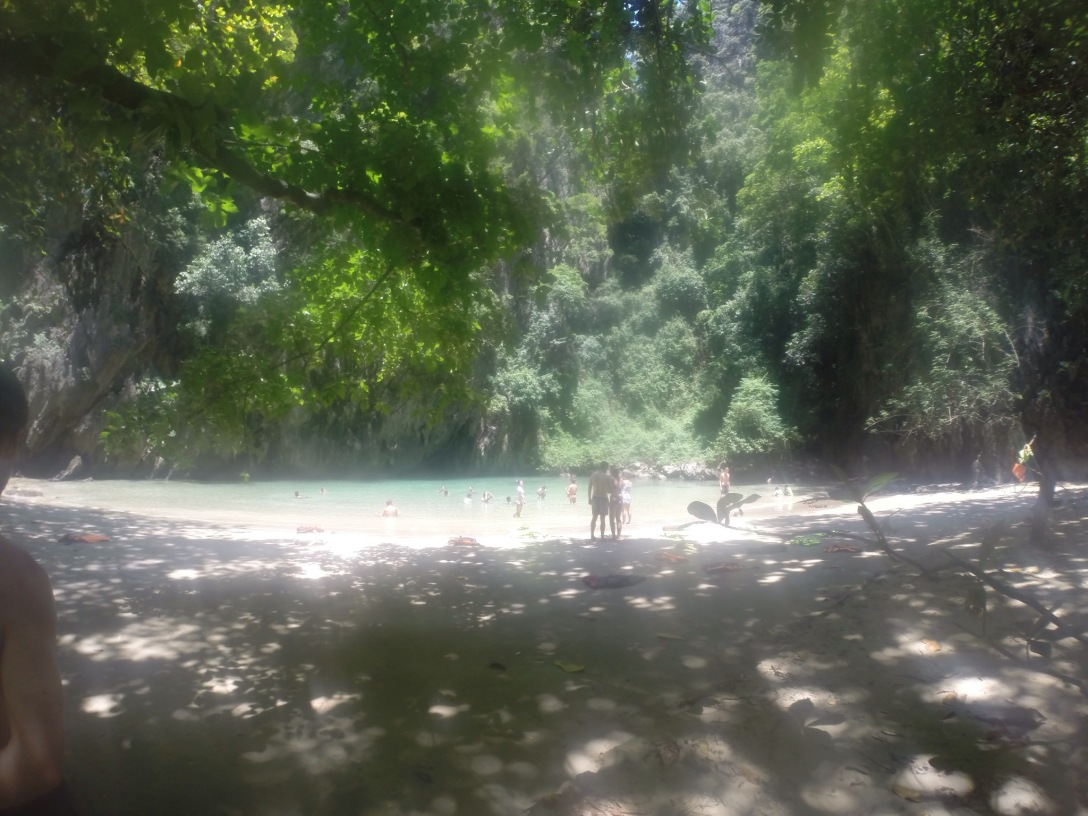 Our final two stops consisted of another snorkelling spot which was slightly less impressive but had a few more varieties of slightly bigger fish, and a lunch stop on the beautiful, tiny island of Koh Ngai. It was the most picturesque beach I have ever been to, complete with dazzling blue water, silky sand, colourful boats and beach huts. We ate sweet and sour chicken with rice, buried our feet in the warm sands and listened to the lapping sea. Before we left, the slightly crazy but fun guide insisted on giving Karl a Muay Thai lesson on the beach, and on the way back nearly everyone fought to keep their eyes open, exhausted by the excitement of the day.

Our last days in Lanta passed less eventfully, but just as pleasantly. We could not have been looked after better at The Old Times, where the team went out of their way to ensure that everything was perfect for us. Despite choosing the cheapest option without breakfast, we were still brought fresh coffee ‘from the jungle’ every morning, with some sort of croissant or sticky rice. After our evening meal they gave us teapots full of jasmine or green tea, with mini truffles or Thai deserts. We also fell in love with their kitten, Manāw, which means lime in Thai. She had beautiful green eyes and a delicate white speckled coat, and was so playful and trusting. They had taken her in when they had found her curled up one day, her tiny body nestled in the triangle cushions they have at the entrance.

On the Wednesday Karl went on a dive trip so I visited a spa recommended by Yuko, aptly named Dreamy Spa, where I had a wonderful full body massage and facial. I spent the rest of the day reading in the hammock on the deck at The Old Times. On our last day we borrowed push bikes from the B&B and managed a 40km round trip to Diamond Cliff on the other side of the island, where we found a secluded beach with a jungle backdrop. We also visited Lanta Animal Welfare, an excellent charity who take in and care for many of the homeless and abused cats and dogs on the island. They welcome people to look around, stroke the kittens and walk the dogs to ensure they are well socialised with a view to one day getting them adopted. We walked Sam, who only had three legs after losing one in a car accident, but still had a good pace and a determined spirit. On the Friday we were offered a lift back to Krabi with two of the people from the B&B, and reluctantly said goodbye to Lanta, promising ourselves that we would be back.